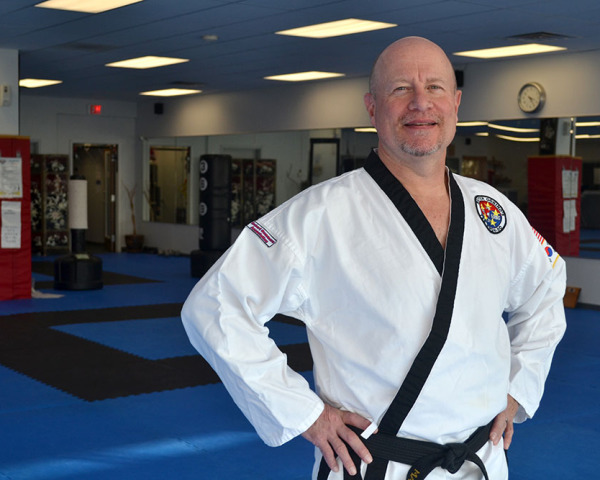 Grand Master Gorino was born in Buffalo, N.Y. in 1956. When he was 10 years old his brother began studying Judo and Jiu Jitsu. Grand Master Gorino also wanted to study a martial art but could not due to financial constraints. He was an accomplished musician on trumpet and piano. So he concentrated on his schooling and trumpet and earned a scholarship to the Berklee College of Music in Boston, where he received a Bachelor’s degree in Music Education. Gorino then pursued a career as a professional trumpet player in Las Vegas and later, Los Angeles. All this while he never lost the desire to study a martial art. Later on Grand Master Gorino also earned his Masters Degree from SUNY at Buffalo.

He first began studying Kung-Fu and later Karate, specifically Isshin Ryu. When the Isshin Ryu school closed Grand Master Gorino met Master Chung Soo Kim. Master Kim taught the World Tae Kwon-Do Federation style of Tae Kwon-Do and under those auspices Master Gorino achieved the rank of 1st Dan. He began competing regularly, enjoying many successes and Grand Championships. Master Kim moved to the Philippines forcing Grand Master Gorino to look for another Tae Kwon-Do school. This is when he met a student of Grand Master Park Jong Soo. who was operating his own school. Gorino watched a few of his classes and knew instantly that this was the school for him. This led to Gorino eventually training under the watchful eye of Master Park Jong Soo and the International Tae Kwon-Do Federation. Gorino later achieved the rank of 2nd Dan and continued to have much success on the tournament circuit.

Grand Master Gorino’s involvement in Tae Kwon-Do had grown to where he needed to be a full time practitioner and wanted to open a school of his own. Within the first year of opening his school, he tested for his 4th Dan test.

Upon earning the rank of 4th Dan (1994) Gorino was awarded the title of Master. Grand Master Gorino’s love of Tae Kwon-Do is still evident by the fact to this day, he teaches all of his students.

Grand Master Gorino is always concerned about each and every one of his students, making sure they are doing well in school and at home. He has been the proud owner of Master Gorino’s Tae Kwon-Do for 28 years and has been training in the martial arts for over 45 years. He has dedicated his life to Tae Kwon-Do and helping people become their very best through this great martial art.

Master Sharratt has participated in more than ten tournaments a year for the last five years of her training at Master Gorino’s Tae Kwon-Do. She competes in patterns, weapons, and sparring. She has won multiple grand championships and earned the respect and recognition of the many Masters and Grand Masters that participate in the North American Tae Kwon-Do community.

In 2022, after teaching Tae Kwon-Do classes for over five years at the Master Gorino school and being named Lead Master Instructor, Master Sharratt opened our new Williamsville location. She is thrilled to be able to continue the tradition of Grand Master Park and Grand Master Gorino’s teachings. This is the next step for her as a Tae Kwon-Do Master, raising up a new generation of students with a passion for the art and teaching students of all ages to defend themselves, maintain healthy lifestyles, and stay disciplined and motivated in every life endeavor.

Grand Master Park began training at the age of 14 and through hard work and effort he progressed. Later he became the instructor of the Police Training Centre of Chun Bok in Korea and of the famed Tiger Division of the Korean Army.

In 1964, he became Korean National Champion, and in 1965 he made a trip on request of the Korean Government, as a member of the Goodwill Mission for Tae Kwon-Do, demonstrating this art before the highest civil and military authorities of the countries they visited. In that same year, he was invited to Germany as the coach of the German Tae Kwon-Do Association.

In 1966, he left Germany to go to Holland where he founded the Netherlands Tae Kwon-Do Association. In the beginning of 1968, he left for Canada and opened his own schools in the Greater Toronto Area. In November 1973, Master Park made another world trip to promote Tae Kwon-Do in Europe, the Middle East and North Africa.

Is Tae Kwon-Do right for you? Register for our trial program today