The five tenets of Tae Kwon-Do are a model for a student’s behavior. It is through these guiding principles that one’s character is developed and nourished. Every Tae Kwon-Do student memorizes the tenets and applies each belief into their life.

Callee and Kate were students preparing for their black belt test. Both were fine students, but Tae Kwon-Do came naturally for Callee, while Kate struggled. When a new technique or pattern was introduced, Calle quickly grasped the concepts. She didn’t always become proficient in the technique, but her innate ability brought her close to mastery. So close that she could fool an amateur judge into thinking she knew the pattern. Kate did not have this luxury. She practiced many additional hours until she mastered the pattern. 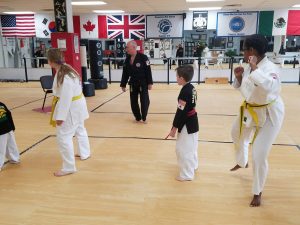 Both students failed their black belt test. They both trained and retook the test a month later, and both failed again. This continued until both girls had each failed the black belt test four times. Unaccustomed to handling adversity, Callee became frustrated and quit, blaming judges and instructors for her misfortune. Kate continued to work hard.

And on her fifth attempt, Kate passed her black belt test. She still studies Tae Kwon-Do today, working on her black belt levels and rising to each and every challenge.

Perseverance is steadfastness in doing something despite difficulty or delay in achieving success. It is always striving to do your best. You don’t buckle under pressure, not on the first, second, third, or any attempt. It’s having that “can do” attitude.

Most people think perseverance is about not giving up, and that’s a big part of it. We teach perseverance as seeing things through to the end, but the key is to always do your best along the way.

When you’re trying to get good at something, you’re going to fail. That doesn’t matter, just keep going. Push yourself on every attempt because just doing the same thing over and over will only give you the same results.

Perseverance involves trying different ways to reach a goal. Life will throw you curve balls, it’s inevitable. These are nothing more than challenges you must accept and overcome. Having perseverance, never giving up, striving to do your best, and trying new ways to obtain an objective, will create a successful life. I promise you.

This is the third post in a five-part series on the Tenets of Tae Kwon-Do. View the first post about Courtesy and the second post about Integrity.