Once, I decided I was going to do one million push-ups in a year. Now, a million is not necessarily a ton of pushups every day, but when you have a life, it is a lot. So, I set myself up and started doing tons and tons of pushups. And, at first, it was going well. I averaged over 2,500 push-ups per day for the first few weeks.

Of course, I was sore and my pecs were killing me. But, I was doing it!

After a while, though, I realized that I wasn’t paying my bills. I could afford to, of course,  but I would simply forget. I was ignoring other important paperwork, too. Basically, I had no life and my responsibilities weren’t being met. I was just doing push-ups all day long.

It was kind of a stupid thing to do. A million was an unreasonable goal to set. I ended up lowering it to a half-million for the year, which was still crazy, but more achievable. And, it allowed me to start enjoying my life again.

My goal of one million push-ups was admirable. It came from a good place, wanting to be the best martial artist I could be, disciplining my body in an extreme way. But not every urge we have for greatness is expressed in healthy ways.

I’ve seen some great martial artists mismanage relationships. I’ve seen people make poor financial decisions in their pursuit, too. Their trade-off was that they became amazing black belts, but other equally valuable parts of their lives suffered. Also, following your passion for justice can lead you to make foolish choices that put yourself in a position that you sh 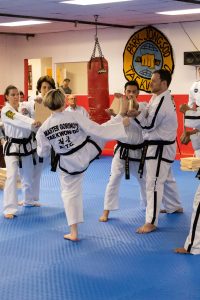 ouldn’t be, like intervening in a fight that’s not yours.

So, sometimes, in the pursuit of being great, we do stupid things. These urges are part of what will make you a phenomenal martial artist. Having the mindset of always going for more and better, no matter what, is essential to achieving our goals, whether that’s to become a black belt or otherwise.

Just make sure that you exercise balance. Listen to your heart. But also use your head. Or you might be on the hook for one million push-ups!