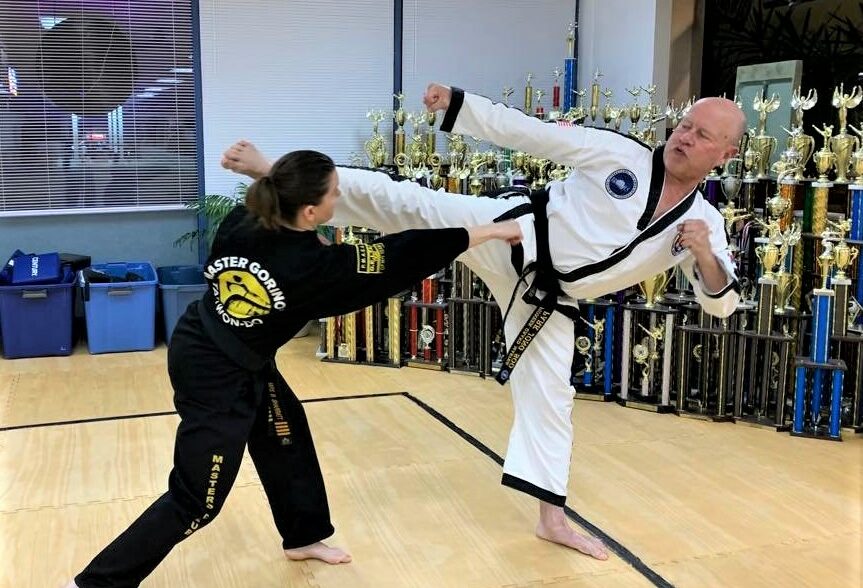 Sparring is about more than just punching, kicking, and blocking. In fact, sparring is as much about not fighting as it is about fighting. It’s about forming relationships, learning humility, and respect.

If I’m really good at sparring, I’m tough. I’m strong. I like getting hit, and I like hitting. If I’m facing somebody who doesn’t have any of that, the worst thing I can do is to go after them and beat them up. What I need to do is to help them learn how to spar, so that they can enjoy it too. Help them learn to block better, to hit better, and to move around the mat better.

There are different kinds of sparring: no-contact, light-contact, medium-contact, and full-contact. Sometimes, we do sparring with no punches to the head, so that they have to work on honing their skills even more. Believe it or not, the head is the easiest thing to hit.

As a yellow belt, the first time we put gloves, boots, and helmets on and get in the ring, we do blocking drills and striking drills. It’s kind of like “semi-sparring”. One person is on offense, one person is on defense. The person on offense gets to practice punching, kicking, moving around, and trying to attack while on the move. The person on defense is trying to learn to follow the rules of how I want them to stand and block.

Because the person on defense is not allowed to hit back, we tell the person on offense that they are not allowed to just tee off on them. They’re also training self-control, humility, and the desire to help others. The defense person understands that even if they were the greatest blocker on Earth, they can only block for so long before they get hit. So as they are blocking, they are thinking about where the strikes might be coming from. Where would I have thrown a punch there?

Sparring is about helping each other improve and enjoying the process of improving. When you find a sparring partner that compliments and challenges you well, you will become fast friends.

I like to pull new students aside and talk to them about why they started training, what they hope to get out of Tae Kwon-Do, things like that. When I was an instructor at a different school, I was talking to one of my yellow belts. He seemed like a confident guy. He had been a Marine and a State Trooper, and was now a lawyer. He told me that he had the understanding of the law aspect of the job down pat, but he was uncomfortable standing in front of juries. He turned to Tae Kwon-Do to help him become more confident.

Once he began sparring, he quickly noticed how it translated to being an attorney. He said that working with someone in the ring was a lot like working with witnesses, juries, judges, etc. You’re moving in, moving out, learning how to set things up, how to react quickly when things don’t go how you think they will.

He and I trained a lot together and eventually became best friends. And yes, I’m still cashing in on the free legal help.

Back in the day, there used to be infomercials for a very popular martial arts-based exercise program. In them, you would see people coming out of the class talking about how they really felt they could defend themselves.

What they were actually doing was no more than an aerobics class with hand wraps on. They were doing kicking motions, but they were definitely not learning how to kick.

When those folks actually find themselves face-to-face with someone, they tend to get laid out pretty fast. I always found it misleading and, frankly, dangerous to let people think they were receiving actual martial arts training.

As you are training to hit, kick, and punch on mitts and shields, some things are happening. You are honing your skills, you are getting stronger, you are focusing better. But sometimes, you are also being lulled into a false sense of security. You start to believe that because you hit a shield or a heavy bag hard, that you have what it takes to defend yourself.

Sometimes you need to take a step back to take two steps forward. The realization that you’re not as tough as you thought and that you don’t know what you’re doing is the crossroads every student reaches. They have to decide whether they’re going to cut and run or work on getting better. Our job as instructors is to figure out how to help both.

Back in my younger days, I used to get a lot of guys who were much bigger than me who would come into the dojang specifically to fight me.

I told them they couldn’t do that yet, but they were welcome to sign up for the $20 trial program. Back then, we fought a lot earlier in the belt ranking. So, some of these guys would take me up on the trial program and actually get to fight me. It…didn’t go very well for them.

I was restrained, but I made sure that, during our sparring session, they knew how little I appreciated their “challenge.”

Some of them took their lumps and walked away. For the others, though, it showed them just how vulnerable they actually were, and they ended up wanting to stick around and learn more. Before I would accept them into the class, though, we would have a talk about their intentions. Don’t forget, their Tae Kwon-Do journey started with them coming in to try and beat me up. I needed to know if those were still their intentions. To beat me up, or to beat up other students. That is not what we’re here to do.

Grand Master Park was the best at teaching humility through sparring. He simply couldn’t be beat. He was so fast, it was truly an exercise in futility to even challenge him.

Even though Grand Master Park was capable of great violence, he never broke anybody. He knew exactly how much to give out to get his point across. Now, I definitely saw him give out quite a bit extra to a few especially-deserving souls over the years. If you had a bad attitude in the ring and you were facing someone like Grand Master Park, he’d let you know how he felt about it.

And you’d never see it coming.

Now, I don’t want my students to go looking for fights. But if they do happen, I have some rules I want them to follow. I first tell them to not go home right away after the fight, so that they don’t get followed. I also want them to come and talk to me about the fight.

Two students of mine, C (a male) and M (a female), were walking up Elmwood Avenue and were accosted by three people. Two of the three attackers moved in on C & M, and got absolutely destroyed. The third wanted no part of it and took off like a coward.

C & M followed my rules to a ‘T.’ And afterward, when they came to talk to me about what happened, the first words out of C’s mouth were: