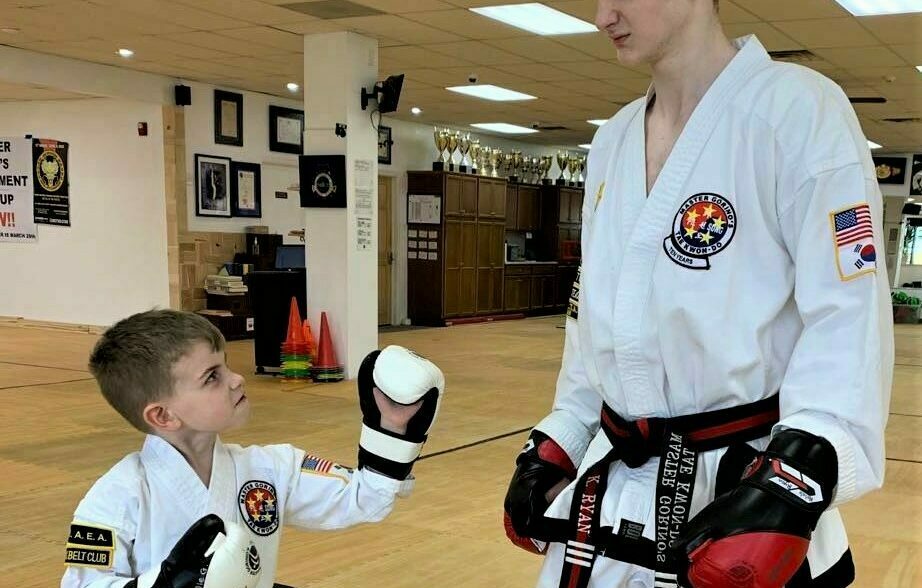 I’m not what most people think of when they hear “Tae Kwon-Do Master.” But that’s exactly what I am.

I have been doing Tae Kwon-Do since I was 8 years old. Sparring is one of my favorite parts of Tae Kwon-Do, and I have won multiple Grand Championships in it. I also have a knack for self-defense and going up against people who are literally twice my size. At 5’2”, there are quite a lot of them.

Tae Kwon-Do isn’t UFC or boxing, where you’re in a weight class and are always matched against someone of similar weight and build. This disadvantage in training helps me: outside in the real world, someone who would attack me on the street is likely to be much larger than me as well.

I also have really small feet, even for a woman. I hear jokes all the time about “How am I able to balance on feet so small?” But someone who is shorter, older, or who has smaller features doesn’t have to take longer or have a harder path to success in Tae Kwon-Do.

We have absolutely no control over body frame and height. So we are forced to adjust the way we use our stature and physical features in order to make our art work for us. Which means being able to defend ourselves against people bigger than us, and being able to compete in situations where we don’t get to choose opponents who are close to our size.

Understanding the challenges and opportunities of my own body type has allowed me to better understand the body dynamics of my opponents as well. For instance, Tae Kwon Do is known for kicking. We talk about kicking high, and kicking to the head. In some competitions, a kick to the head is worth more points. I’m not always able to do that against somebody who is 6’2”. It’s important to know my limits in that situation.

When I’m sparring someone larger than me, I will often move in and try to get behind them. I’ll take the advantage by getting in on their legs and being speedy. Or I’ll go up over the top and throw a jump punch, which they won’t be expecting.

For small athletes, the element of surprise can help take your opponent off-guard. I was in a tournament, sparring with a woman who was probably 17 years old, about 20-30lbs heavier than me, and about 4-5 inches taller than me. To hold her at bay, I kept throwing kicks to her arm, something most opponents would have never expected.

The kicks weren’t extremely hard, but they were hard enough to sting her and let her know that even though I was shorter and smaller, I had power. I knew how to get on the inside if I needed to. That took away her ability to use her normal skill set and fighting technique. She simply wasn’t prepared for it.

I had male cousins who, as they grew up, became a foot taller than me, and upwards of 100 lbs. heavier than me. Recently, I was out with one of them, and we were talking about wrist locks and things like that. I showed him that if someone is trying to overpower you with a handshake, there’s a way that you can, with a quick turn of the wrist and hand, get them into a wrist lock.

I took him down fairly easily. Now, I was careful not to hurt him, but I showed him that even someone like me, who is half his size, is able to employ certain techniques to her advantage to protect herself.

This is why I agree that Tae Kwon-Do is for everyone. And it can be especially helpful for women who are short, light weight, and maybe even consider themselves frail. Tae Kwon-Do will teach you how to use your body to manipulate a situation where you don’t need a lot of power. Instead of brute force, you can use timing and the right technique to get inside on someone and overpower your opponent.

The ability to do this is a huge confidence builder as well. Fortunately, I have not had to use my Tae Kwon-Do training outside of the dojang and tournament space yet. But I am 100% confident that if that day ever came, I would be successful.

About the author: Master Sharratt