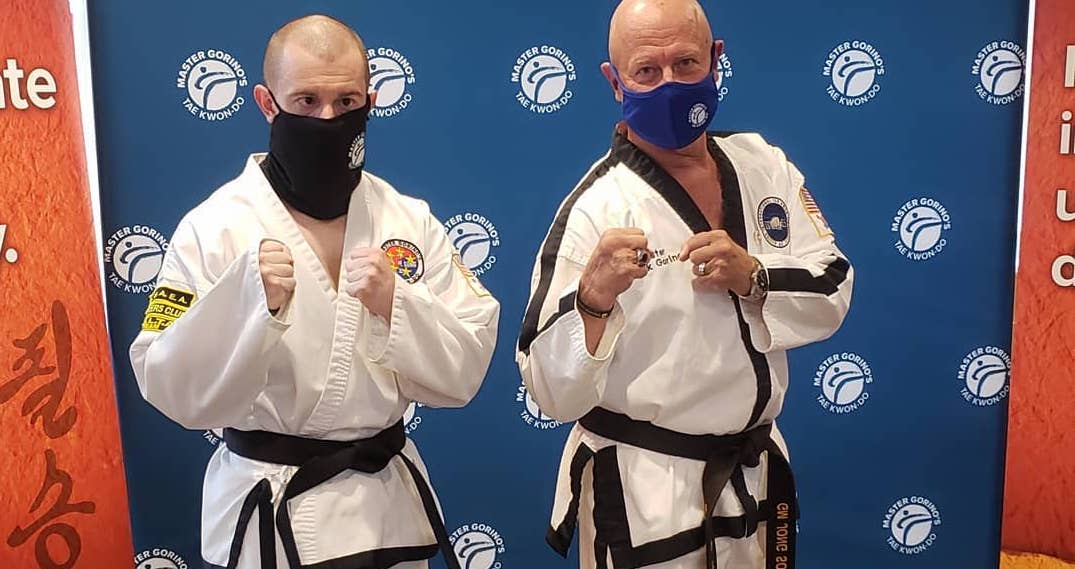 Imagine you own your own dojang.

Students come and go, and a lot of times they complain about how hard it is, how they don’t think they can keep doing it, etc., etc. But, once in a while, a student comes in that is all smiles, eager to train, and committed to the process and becoming the best version of themselves.

Now, imagine that student is blind.

I have the great fortune of having a student like that. His name is Mark Guglielmi. And I am proud to have him at our school. 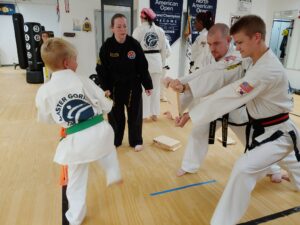 I have had students come in who are totally blind. Or, as they like to say, they are “in the dark.”  Instructors usually have to begin training by literally putting their arms around them and essentially “being” them while we’re describing a technique.

Needless to say, as much of a challenge as it is for the instructors, it is vastly more difficult to learn Tae Kwon-Do without being able to see. I have often said if given the unthinkable choice of giving up either my sight or my hearing, I would have to give up my hearing. And this is coming from a musician.

Mark is legally blind, not completely “in the dark.” He can see shapes and shadows. But, he can’t do things like read or drive a car. When he first came in, he asked if I thought he would be able to learn Tae Kwon-Do. If you know me by now, you know that I think everyone can learn Tae Kwon-Do, and I told Mark he was no different.

I explained to him exactly how we would teach him. I explained that we would be a little more “wordy” when talking to him, that instructors might have to touch his hands or feet, or even put their arms all the way around him and “be” him, so that he could feel what he needed to be doing.

Basically, I promised him I would do whatever it took to make him a black belt. But, I also explained that I would never coddle him or feel sorry for him. Naturally, he was very agreeable to that.

There was immediately something special about Mark. He didn’t just come to class “hoping” or “wishing” he could do it. He was definitely in the Master Gorino “mold,” so to speak.

When a student is questioning their ability, the speech I always give focuses on getting rid of the word “if” from our lives, and replacing it with the word “when.” So, instead of wondering if you can do something, you say how you look forward to when you can do it. It’s simple, but it’s powerful, and it works.

Mark didn’t need that speech. He had a “when” attitude from the moment he walked in the door. He trained hard. And, I could tell he worked out a lot outside of the dojang as well. One thing I noticed immediately about him was that he had a strong physique.

Another thing I noticed right away was Mark’s razor-sharp sense of humor. In that way we quickly developed a rapport and would joke back and forth, sometimes even about his blindness.

One day I noticed that Mark came in with a bicycle helmet on.

“Is it getting that bad, Mark?” I joked. “You’re running into things now?”

He laughed and said “No sir… I rode my bike here.”

Apparently, Mark learned that as long as he had someone in front of him, he could make out their shape and safely follow them.

He is constantly blowing my mind with things like that. I remember him telling me that he was going to school to get his doctorate in physical therapy. I could only imagine how difficult it would be for someone with sight issues to be able to evaluate another person. But, this is Mark. He of course got his doctorate and has been a licensed physical therapist for many years.

I mean, heck… just recently, he told me he went hunting and bagged a deer! That’s Mark. Amazing.

So, it didn’t shock me one bit when he asked to take part in a board-breaking workshop that we were having. All he asked was that we show him where the boards were and he was confident that he could break them.

He was awesome at that workshop, and every workshop afterward. The next step for him was competing in tournaments.

Some of the tournaments Mark wanted to compete in were heavy-duty. I told him that I couldn’t let him go into these tournaments without letting his opponents know he is blind. He bristled at that a bit, but assured him that it wasn’t because I was doubting his ability to defend himself if someone off the street was giving him a hard time. But, the fighters at these tournaments are highly-trained. 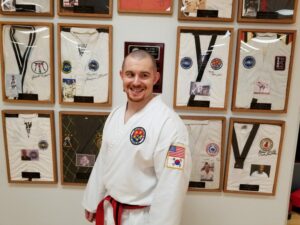 Some tournaments do have special divisions for people who are blind, or have physical disorders, which is great. Mark really didn’t want to have to enter those divisions, but as his instructor, my #1 job is to look out for the safety of my students. So, for those tournaments, he reluctantly competed and did very well.

For the tournaments that don’t have special divisions, I would simply tell the other competitors about his blindness. More than anything, I was worried about his face. Although he can see shapes and shadows, he had trouble gauging how quickly something was coming at his face. The other fighters were more than accommodating, though, and agreed to ease up on facial contact.

I wish I could tell you that Mark wins a lot of tournaments, but he doesn’t. He does, however, win a heck of a lot of fights. It doesn’t deter him one bit, though. He always comes back to compete, and he remains committed to fighting, performing patterns, wielding weapons, etc.

At one point, Mark stopped showing up for training, which threw me for a loop. When I finally called him to ask him about it, he told me that he had been in a pretty serious relationship and that he moved with his girlfriend into a place in Cheektowaga.

Before, Mark lived pretty close to the dojang and would either walk here or, of course, he would ride his bike. When he and his girlfriend broke up, though, being in Cheektowaga, it was too far for him to ride here anymore, so he had to stop coming.

There was no way I was going to let him stop his training over that. So I told him not to worry, that we would make sure he got here. He, of course, didn’t want to put anyone out.

But, this is Master Gorino’s. We’re a family, and Mark is a valuable member of it. So, I had a meeting with the other black belts, and we worked out a schedule where one of them would pick him up for training, and bring him back afterward. We still do that to this day.

Mark is a consummate martial artist. He is a fighter, an intelligent student, and a good man. He is a reminder of how lucky I am. He is a monument to how no matter what shapes and shadows encroach upon your life, that you can overcome, succeed and become something amazing.

I am proud to call Mark my student and to have him represent the dojang.