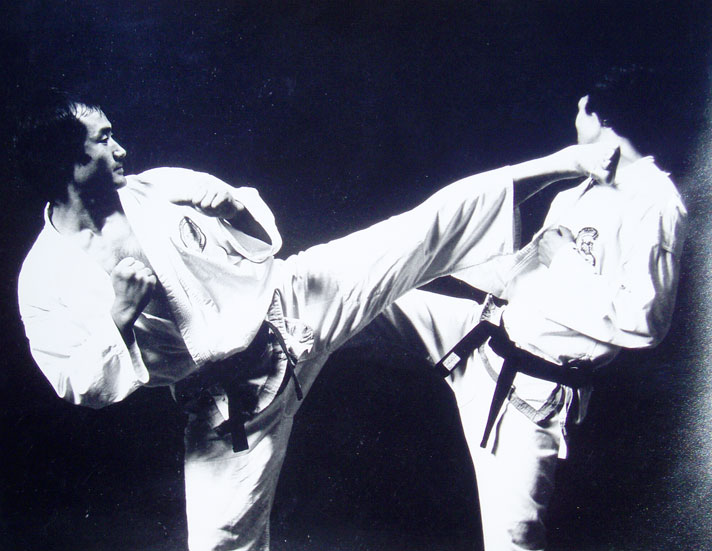 The first time it happens, it comes out of nowhere.

A fist collides with your cheek. Your eyes open wide, and begin to water. Your nose begins to run.

What happens next, though, is up to you.

Most people that come to my school aren’t ready to be punched in the face. That’s why they come. Admittedly, though, we didn’t always see it that way.

Many years ago, I was in one of the rougher schools I have ever been in, and we fought very hard. If we ran a school now the way we did way back then, we would very quickly be sued out of existence.

Things got broken. Noses, cheekbones, ribs, the walls, windows, you name it. (We’ve come a very long way since then!)

Back then, there was a female student who was watching a sparring class. I was assigned to “coach” her through the class, because she was nervous.

In a boxing division, if you’re 10lbs apart, you’re in different weight classes and will never fight each other. It would be unfair. In martial arts, we view it differently. Martial arts trains you for real life, and in real life, your attacker is not going to care about a weight difference. In fact, it’s likely that you will be attacked precisely because of the weight difference.

Back in those days, it wasn’t uncommon to treat female students more delicately and progress them through the program a little slower. What can I say… it was 30 years ago. Times have changed, thankfully.

As I was saying, I’m coaching this woman and she’s getting intimidated. These were black belts she’s watching. Because they were at this school, they were being more brutal than normal.

I assured her that because they were black belts, they were fully in control and, although they were sparring hard, they were okay. I told her that when it was her turn to spar, they would take more time with her, teaching her how to stand, how to block, etc.

She began to calm down to the point where she felt mostly ready to jump in. There was still some visible doubt in her, but I was able to bring her back to Earth.

Then, I get called up to spar with my instructor. He and I always had – shall we say – animated fights. In this particular fight, I tagged him pretty good in the face. At this dojang, the common thinking was that sometimes it’s better to simply know you could have, but never do it, because of the payback. (A practice that has no place in my dojang today.)

After I got him, he looked back at me and I knew it was going to keep escalating. So, we get back into it and, sure enough, he’s coming at me harder and harder. I was having a good night, keeping him off of me, but each time I did he would get more and more aggressive.

At one point late in the session, I looked back at my student and she looked terrified. I paused for a moment to give her a thumbs up to reassure her that everything was fine, and WHAM! I took a spinning heel kick, right to the face.

I went down hard. My head landed right in her lap. I’m bleeding out of my nose and the corner of my mouth, all over her. I can still remember her terrified face as she was holding my head, begging me not to get back up. I kept telling her that I had to get back up. That’s how we do it.

I got up and finished the fight. Afterward, I’m sitting with her and she is absolutely freaking out over what she just saw. I again had to calm her down and reassure her that I was fine. Eventually, she came around. I went to clean up and when I came back, kleenex stuffed up my nose, the instructor had told her it was her turn to spar.

She again looks at me, terrified. I tell her it’s okay, and that I will spar with her instead. She’s still pretty shook up, so I tell her we don’t have to hit each other. We can just move around the mat, almost like we’re dancing. She was still resistant.

She threw her hands up, began crying hysterically, and ran into the ladies room.

She stayed in there through the rest of the class. Sometimes people would stay after class to spar and we would stay with them. She stayed in the ladies room through all of that as well. Every time myself or someone else went to check on her, she would tell us to leave her alone. I stayed as long as I could, but eventually, I went home.

I never heard from her again.

We talk a lot at my school about the four times you will want to quit. Sparring is certainly one of them. As long as you’re punching and kicking bodies and shoulders, people are less likely to quit. When people get hit in the face, reality hits as well.

In the 80’s and 90’s, the #1 reason people used to quit sparring, was sparring itself. I hate to say it, but we weren’t very good teachers back then. When someone would come in that was big and strong, and seemed like they could take it, we would go after them.

One time, we had someone from the Buffalo Bills show up and we got excited. We actually flipped a coin to see who was going to spar with him first. When I got to spar with him. I caught him really good in the face. I’ll never forget the look he gave me. He was shocked. Now, this was a big guy. He probably could have put me through a wall. But in this moment, it was clear that he hadn’t been hit like that before. Especially from someone as small as me.

I always joke that you can do sit-ups and push-ups to strengthen and toughen up your body, but you can’t do face-ups.

The moment of shock only lasted a second or two, but it was there. It’s there for everyone. The only difference is how long it lasts. For the Buffalo Bill, it was only a second. For my old student, it lasted forever.

We have learned a lot in those 30 years, though. We have modified our training so that sparring doesn’t happen until you are ready. Back then, we didn’t consider that the people coming through the door were coming in because they didn’t know how to fight. So, when we would go after them like we did with our football player student, it would only reinforce how little they knew about fighting, and they would quit.

Now, we start by throwing punches and kicks to the face much slower to teach you how to see it coming. Seeing the punch coming is so important. It takes the shock out of the equation.

We also do a lot of blocking drills in order to teach people how to protect their face. Because we know that getting punched in the face is one of the quickest ways to get someone to quit. As a businessman, I obviously don’t want anyone to quit. But as a martial artist, I want them to learn how to overcome this obstacle and become stronger.

I ultimately believe that a punch in the face can be a good experience, as strange as that may sound. It prepares you for the unexpected in a way that few other experiences will.

We all get “punched in the face” from time to time. Metaphorically, of course. We get shocked by some unexpected challenge or circumstance and taken aback. Or, we’re faced with what we think is an insurmountable problem. We see the incoming force as a “threat” because we lack previous experience. However, when you’ve “seen it before” you are better prepared to respond well and win the day.

Life punches us in the face a lot. The more surprised we are, the harder the punch. We can decide to recoil and retreat to the locker room, or get back up and grow stronger.