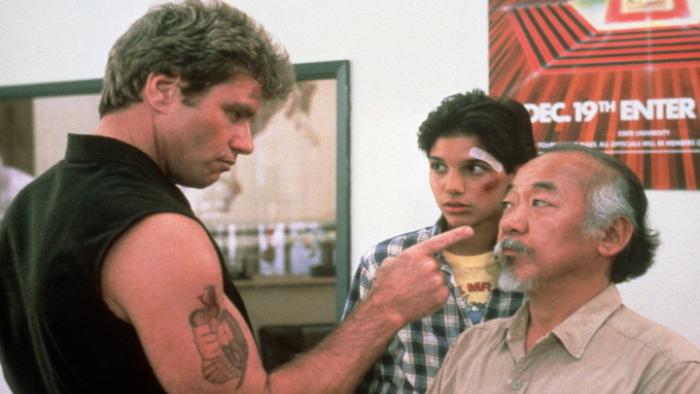 The original “Karate Kid” is one of my favorite martial arts movies of all time.

Martial arts and Hollywood have a complicated relationship. There have been some very realistic portrayals, and some very unrealistic ones.

The “Kung-Fu Theater” films of the 1970’s featured a lot of wire-work, with people flying through the air. Unrealistic, but a ton of fun to watch. On the other hand, there was Enter the Dragon, starring one of the greatest martial artists of all time, Bruce Lee. If you love martial arts but haven’t seen that movie, feel free to turn in your martial arts card right now.

In the 80’s, the martial arts in movies became more sport-oriented. This was the Chuck Norris era, with movies like A Force of One. Chuck had become a dominant tournament fighter after his military training in Korea. He was a great martial artist, and I’m proud to say, a really good guy as well.

In the 90’s, Above the Law with Steven Seagal was my favorite. It featured a more grounded, realistic approach to martial arts. With Seagal, the application of martial arts focused more on personal self-defense and law enforcement.

Believe it or not, the Karate Kid movies, which have returned to popularity with the “Cobra Kai” spinoff show, really hit home for me.

The Karate Kid is all about mentoring. Mr. Myagi is to Daniel LaRusso what I aspire to be for all of my students. He teaches Daniel-San that karate is to be used for self-defense only.

In my  opinion, that’s exactly the way it should be.

The rival school, Cobra Kai, lives by a famous motto: “Strike First. Strike Hard. No Mercy.” You might be surprised to find out that I can find some truth to that.

It was an Isshin-Ryu school – high-intensity and old-style. We trained hard. We trained full contact. It was in the basement of a gym where a bunch of muscle-bound gym-goers worked out. We would often invite them down to “train” with us; in other words, to let us beat the crap out of them. It was actually part of the school’s belt test.

When you turned 18, you even had to go to a bar with the instructor, pick a fight, and win. Needless to say, it was wild.

It was also no surprise to anyone when the police eventually came in and shut it down.

This was my first foray into a martial arts school, so I didn’t know that this was not normal. I actually loved Isshin-Ryu. But at the time, Tae Kwon-Do was becoming popular in my area. My Isshin-Ryu instructor would talk about how the Tae Kwon-Do guys were coming to town and absolutely dominating in tournaments.  How their kicking skills were like nothing he had ever seen before. This led me to my second school. I had to see what Tae Kwon-Do was all about.

I picked up a phone book and flipped through the yellow pages until I saw this tough-looking Korean guy. His school had a branch in my neighborhood, so I went. He wasn’t there, but I did get to meet one of his students.

We hit it off really well. He was rough-looking, but a great guy. We trained hard together for a little while, then I got to go to the main school and meet with the tough-looking Korean guy from the Yellow Pages. He was the school’s Master. He enjoyed my training very much, and soon asked me to train permanently with him.

That Master eventually moved to the Philippines, Las Vegas, and finally Texas. I ran a branch of his school while he was away. Eventually, he asked me to run his entire school for him, but I didn’t think I was ready at the time.

If the Isshin-Ryu school was Cobra Kai, the tough-looking master’s school was Myagi-Do. It was self defense-oriented, very traditional, and extremely regimented. This school is where I learned to be more militaristic and disciplined.

Soon after, I met Grand Master Park and his students. He had a nice hybrid of the Cobra Kai and Myagi-Do schools of martial arts. Very traditional, with strong, aggressive fighters, but also disciplined.

I had found my home, and I never looked back.

As I said, the Cobra Kai ethos actually makes some good points. First, they train hard. I encourage anyone who trains at anything to train hard. Also, striking first is sometimes a good idea. Striking hard is always a good idea. Being full-blown Myagi-Do can actually get you in trouble in a fight. Too much defense and not enough offense is not a recipe for success.

The whole “no mercy” thing though? I don’t agree with that. I prefer to follow in Grand Master Park’s footsteps: use martial arts only in self-defense like Myagi would, but strike first and strike hard when you do need to fight, like a Cobra Kai.