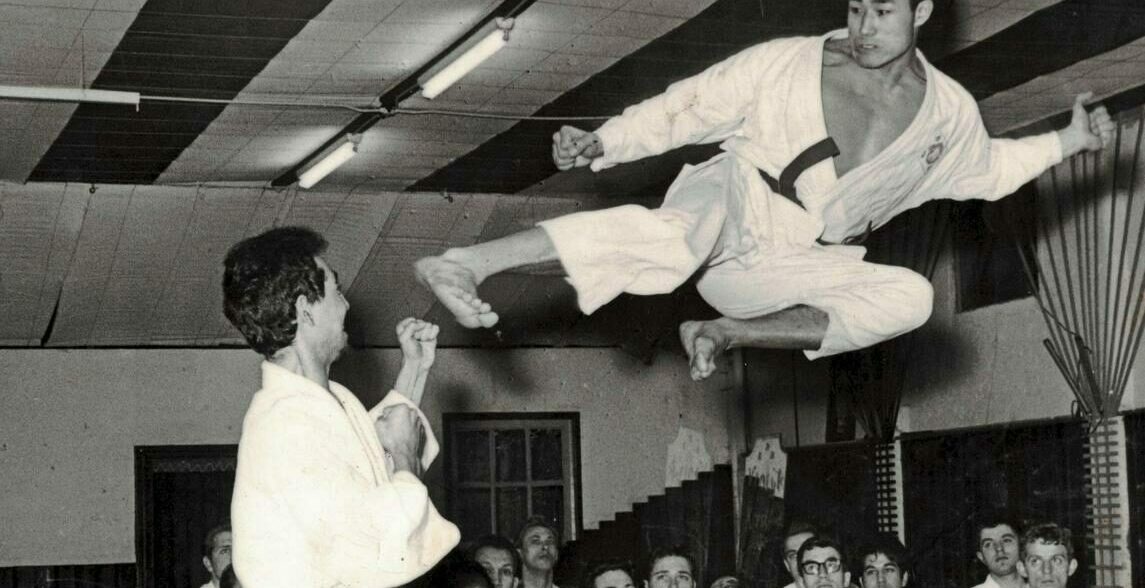 For the longest time, we were earthbound.

When I took Isshin-Ryu, we didn’t do any flying kicks. It was the same with other forms of Karate as well. It wasn’t until Tae Kwon-Do came out that flying kicks became such an integral and iconic part of martial arts.

The flying side kick just looks beautiful. Done well, it is a work of art. It comes as no surprise that when people are promoting themselves or a school, the flying kick is the image they use. It has become a symbol of Tae Kwon-Do itself.

How do you execute a basic flying side kick? Let’s say you want to kick with your right foot.

First, you need to get a running start. I often teach people to take smaller strides at the beginning of your run, then longer strides as you prepare to kick. I find that you get a much higher and more powerful kick that way.

As you are going into your kick, if you’re doing it the easier way, you push off with your non-kicking foot. You wouldn’t think so, but over time, that foot can actually take quite a beating.

Then, you go into your jump. As you’re facing your target, you turn toward the opposite side you’re going to kick with. So, if you’re kicking with your right foot, you want to turn to the left.

Keep your body upright and, at the moment of impact, extend your right leg and right arm while guarding with your left arm and tucking your left leg underneath. If all goes well, you strike with your kicking foot, then land safely, feet first, on the mat.

That’s easier said than done, though. Part of why I find flying kicks so beautiful is because I know how difficult they are to pull off.  You need to have really good balance, because you don’t have your foot on the ground to anchor yourself. You’re up in the air and you’re throwing a kick at the same time. No easy task.

When I had my 4th degree black belt test, one of the patterns I put together was a musical pattern. I had a running, flying side kick in there and was pretty excited to do it. As I took off, I knew I wanted to kick high so I leaned back, but a little too much. You can’t tell on the video, but I was very close to losing my balance and could have landed on my head.

As hard as a flying side kick is to do, it is even harder to do true-to-form. To execute a perfect flying side kick, your kicking foot needs to be extended fully, with your heel out, and toes down. Your opposite leg needs to be tucked underneath you, and your hands need to be in a guarding position.

Many people who do flying side kicks don’t have proper foot position, proper hand position, or their leg isn’t properly tucked underneath. I have even seen some people attempt a flying side kick by jumping through the air with their leg extended; almost as if they’re jousting with it. You really need to jump, tuck, kick, tuck, land.

Grand Master Park was amazing at flying side kicks. Or any jumping kick. When he went on that first tour, bringing Tae Kwon-Do out of Korea and into the rest of the world, one of the places he visited was Japan. He once told me a story where he was lined up against other Japanese Martial Artists. He remembered that the Japanese fighters would come at you hard and fast. His response was to step back into guarding position, which confused them.

As one fighter charged him, Grand Master Park jumped and did a spinning hook kick, tagging the guy on the other side of his head. He realized then that the other fighter hadn’t even seen what hit him. As Grand Master Park told me, “It was at that moment that I knew he couldn’t see my foot, and I did not have to worry.”

It takes great balance, discipline, and practice to master any of the iconic flying kicks of Tae Kwon-Do. To be able to throw them so fast your foot can’t be seen like Grand Master Park? That takes something else entirely.