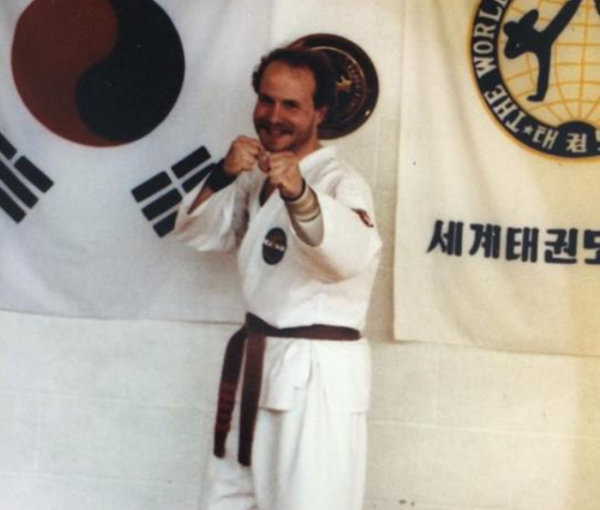 My very first Tae Kwon-Do lesson (I had taken Karate before) was under a gentleman named Wan Jo Lee. He was a great martial artist; he really knew his stuff. Unfortunately, he was not very organized in his approach to teaching.

For my first lesson, I walked in, signed up, and got a mini private lesson right there. He showed me how to tie a dobok, where my lessons would be, and how to do some basic stretching.

Back in those days, all ranks trained at the same time. That had its pros and cons. You got very little attention as a beginner, but you also got the opportunity to surround yourself with people of higher skill performing the same moves you were trying. That was especially helpful for the times that Master Lee would show the class something, then walk away. He would mostly walk around checking individual students, talking to his black belts, etc. I was very observant in that first class, watching the other students. They were now my instructors.

The higher belts told the new students where to line up and how to stand. Once I was in Junbi stance, I listened to an instructor speak in a language I didn’t understand, which I later learned was mostly Korean with a little English and other languages peppered in there.

I remember doing floor exercises, where we went forward and backward doing punches and blocks as we moved. Then we practiced kicks from a stationary position with each other. Once we got through the basic drills, we split off into groups and began hitting mitts, because I don’t think we had shields back then. We also had a canvas heavy bag which honestly must not have been very heavy at all because everyone was beating the heck out of it.

When we weren’t doing the hitting part, we were being taught our patterns. The patterns we did then were not the ones we practice now. Those first patterns were a bit more traditional: a bit more Kwon-oriented, as opposed to the Oh-Do-Kwon patterns we do now; the Chang-Hon forms.

Even as white belts, we would line up and do some light sparring. There was no equipment back in those days. Luckily, the black belts were respectful of the disparity between our ability and theirs. That wasn’t always the case with some of the higher color belts. They were still typically egotistical: black belt wannabes, essentially. But we moved around and learned how to throw some kicks and punches. It was very traditional, but not very exciting. There wasn’t a lot of energy from our instructors.

I decided I needed to find a different school.

Master Lee also owned a store in the front of the dojang and used to leave the room a lot. During one lesson, he put me in a stretch rack and completely forgot I was back there. He went up to the front to sell some food and finally I started yelling to him, “Sir! I’m back here still!” He came back and let me out. Master Lee produced some great fighters, but that school just wasn’t for me.

The first lesson I taught at my own school was, admittedly, pretty scary. I had taught before at other schools, and it came naturally to me. I was loud. I was exciting. I was everything an instructor was supposed to be.

But now, with my own school, I felt a heightened sense of responsibility. I remember looking out at them and thinking, “I cannot fail these people.” These were my students now. In a way, they were an extension of my family. I looked into their eyes and thought, “I have to do my very best every time I walk on the floor, because these people are trusting me with their martial arts education.”

Instead of taking as a student, it was now my turn to give as an instructor. And the responsibility of that was something I have, and always will, treat with the utmost respect.

In other words, as my student, I will never leave you hanging. Literally or figuratively.