Grand Master Park studied under General Hong Hi Choi while both were serving in the Korean Army. General Choi is universally considered the Father of Tae Kwon-Do. He developed the art during his time in the military, and on April 11, 1955, Tae Kwon-Do was formalized and named the official martial art of Korea. 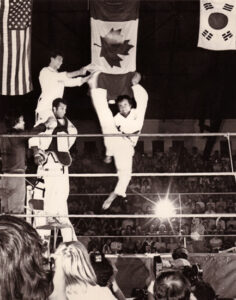 That discipline made him the best of the best. It also made him the perfect student to help General Choi spread the word about Tae Kwon-Do. He would take Grand Master Park on tours all over the world. They would go to military bases, police academies, etc. On these tours, the typical regimen was to get up at 4:00 a.m., go for a run, train, have a small breakfast (because they were too poor to have a good breakfast), go and teach Tae Kwon-Do all day, then spend the evenings sparring.

During the tours, Grand Master Park fought every champion from the Police and Military Academies he would visit, and he never lost a single fight. He has even beaten UFC 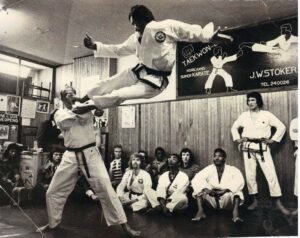 It wasn’t a matter of hurting people, he was out there to spread the good word of Tae Kwon-Do.

“It is very easy to hurt someone. It is very hard to heal someone. Spend more time learning how to heal,” he would always say.

It is that sort of integrity and self-awareness that he has imparted on me, and that I teach my own students. I have had the good fortune of training with Grand Master Park for a long time. I have also had the fortune of traveling quite a bit with him to places like Korea, Japan, Argentina, etc. to help teach seminars, much like he did with his Master, General Choi. 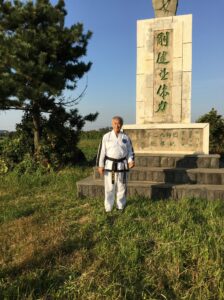 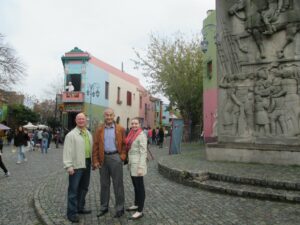 Aside from him being a rockstar and being given the VIP treatment in Tae Kwon-Do circles, one of the things I have noticed is that the BS stops when he enters the room.

Martial artists love to talk, particularly about how good they are, how their instructor is the best, etc. I have been in rooms like that, but as soon as I tell people my instructor is Park Jong Soo, the whole mood changes. They get quiet, they bow. All of a sudden, they’re not so great.

When Grand Master Park himself walks in, the same quiet respect washes over everyone there. That’s where he stands in the martial arts world. 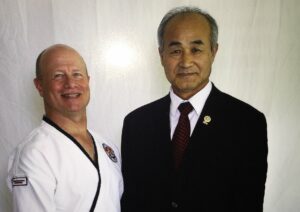 Grand Master Park is my Tae Kwon-Do father. He is also in many ways like my actual father.

In fact, my son Charlie was in my wife Martica’s belly when we all traveled to Korea, unbeknownst to us. On that trip, my wife Martica spent a lot of time talking to Grand Master Park as well.

So, when we told him later about Tica being pregnant on the trip, Grand Master Park asked if that technically made him Charlie’s grandfather, which I happily told him he could be.

He responded by telling us that in Korea, the Grandfather typically chooses the name of the child. “Here we go,” I thought. 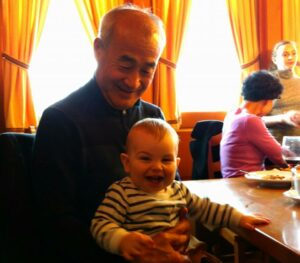 Instead, he asked us what we wanted to name him. So, I told him that we hadn’t decided on a girl’s name, but if it was a boy, that we would name him Charlie, after me. Luckily, he was okay with Charlie. Jong Soo Gorino just doesn’t have the same ring to it.

That’s just his personality, though. As strict and serious as he was as an instructor, he can

be quite a character.

Grand Master Park is a man of many talents. He once owned part of a coffee business and a mink farm. He used to scuba dive, and was even a skydiver at one point. And like many of the Korean Grand Masters are, he is an incredible golfer.

Not surprisingly, though, when I asked Grand Master Park about it, he was actually disappointed in his game. Always room for improvement. 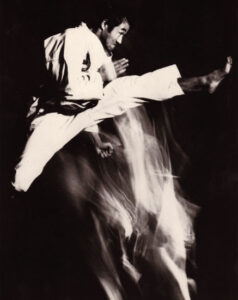 These days, I have a lot of conversations with Grand Master Park about politics, the world, Tae Kwon-Do, etc., and even now, he always gives me another way to look at things. He is not like other Grand Masters, though, where he takes offense and gets upset if you question him. He’ll acknowledge your question, and either promise to give it some thought, or, if he disagrees, he will politely stick to his beliefs.

Like I said, martial artists are talkers, and Grand Master Park is no exception. I always have to block out time when I’m going to call him. What would be a 10-minute conversation with anyone else, is usually a 45-minute to an hour-long conversation with him. My drive home at night is exactly 18 minutes. So, I know that if I call him on my way home, I’m going to be sitting in my driveway for a while talking to him. It’s a privilege that I cherish, though, as any time spent listening and learning from Grand Master Park is a gift.

As Grand Master Park gets up in years, I am blessed to still be able to learn from, laugh with, and admire the greatest to ever do this thing I love so much.