When you’re someone’s hero, you don’t let them down.

That’s why, when my eight-year-old student, James Murray. Invited me to his school’s “Who’s Your Hero?” breakfast, I couldn’t have been happier to go.

It was such a great morning. You could tell James was so excited to show me off to everyone. It reminded me of how I am sometimes around Grand Master Park. When we are together, I’m constantly trying to wait on him and get things for him, and he’s constantly reminding me not to treat him like an invalid.

“The mouse does not always have to take care of the elephant,” he always says.

I’m not even really sure what that means, but somehow I understand.

James was being the same way with me that morning, and I had to keep reminding him he’s not my servant. We’re on the same team.

At one point, James had to get up and say something about me. It was one of those rare, lump in the throat, heart-pumping moments. But, from that point on, I was hooked on this kid. 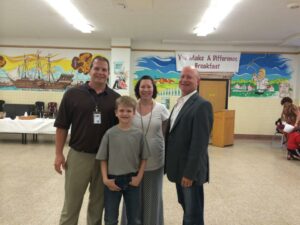 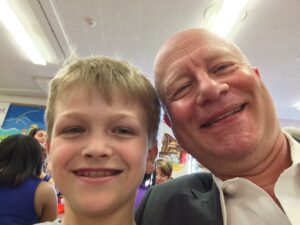 Now, it’s my turn to tell you a little bit about my hero, James Murray.

James started at the school a year earlier, when he was about seven years old. I was told that he needed some self-confidence, focus and discipline, which is pretty normal for students.

James’ father also told me that James had some learning disabilities that were being poorly addressed at his school. He was dyslexic, had ADD and ADHD, and a myriad of other diagnosed issues. He was also being medicated to address some of those issues. 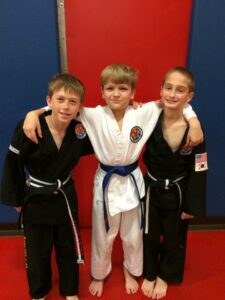 At that breakfast, I talked to a few of James’ teachers and, for the most part, they had nothing but nice things to say, mostly about his character. But, one thing they all mentioned was that they didn’t have very high expectations for him, given his learning disabilities.

This really bothered me, and I decided right then and there that if they weren’t going to have high expectations for him, I was. So, I began to push him harder. Not surprisingly, he wasn’t hard to push. He just worked harder and harder.

When parents ask me if I can “fix their child”, I have to be careful about managing expectations. So, my response to all parents is the same. I can’t guarantee that I can fix your child, but I can guarantee two things: no one who has ever come to this school has gotten worse, and everyone who comes through here gets better in one way or another.

I have always had success in helping people improve their quality of life, and have met many of the expectations of students and parents alike.

So, with James, we just put him through the regular program. as we do with the other students. At first, he was bouncing off the walls and extremely unfocused. But, he was also happy, and seemed genuinely glad to be here as far as I could tell.

James took to the program very quickly. He is a bit of a people-pleaser, always wanting to do well and not let anyone down. When someone trusts the program early on, it helps me help them. When people fight the process, I can still help them, but it takes a lot longer.

It didn’t take long for James to get into a regimen and start seeing results. He still had some trouble sitting still, but he was becoming more focused and a much better listener.

James was being recognized by a lot of our staff as someone who was not only learning fast, but also was a nice kid and a pleasure to be around. So, it was a no-brainer to add him to our black belt club.

I remember James’ father commenting that when they brought James in, they weren’t looking for miracles. But somehow, miracles were happening. 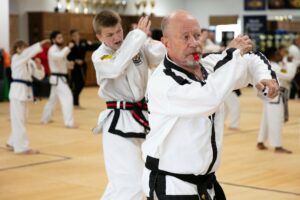 Before long, James became part of our Junior Leader team, which put him on track to become an assistant of some sort. Which means he would be helping out in class.

The first job of a Junior Leader is to become what we call a “good finder.” We have them walk around during the class and find something good to say to someone about themselves.

“You have a good stance.”

Anything positive that they can find and point out about that person, they are encouraged to do so. And James really liked doing that. He loved to compliment people.

As time went on, James earned his black belt. So, he was getting really good at Tae Kwon-Do, he was doing really well as a “good finder.” The next step was for James to join our Master’s Club, which means that he is committed to going beyond black belt, and allows me to spend some more time mentoring him.

Fast forward to James at about 12 years old. He’s in our Junior leader team and I’m allowing him to do more and more than just being a “good finder.” He’s learning how to correct and adjust people’s form properly, he’s learning how to interact with and help adult students more, etc. He’s getting very good at Tae Kwon-Do, and is at the point where he can start showing people some things.

But, I’m noticing that he’s not holding himself in as high esteem as everyone else. He still hangs his head. So, I started to have more mentoring talks with him. I told him that I know he’s facing uphill battles, but that I expected a lot out of him because I know he has a lot to offer this world.

Naturally, he took all criticism, positive and negative, very well and began to move forward even more. 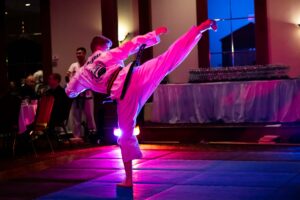 By the time he turned 14-15 years old, he was growing physically and becoming more and more capable. School was still an issue for him, but the problems he was describing seemed pretty normal for a kid his age. This actually encouraged me a lot, because apparently he was either “normalizing” or learning ways to overcome his deficits.

By 16, I’m allowing James to teach his own classes. He understands everything, he is physically capable of teaching the basics, and he was communicating well, which was one of my biggest goals for him. When he came in, his vocabulary was limited, his confidence was low, and he spoke with his head down. Now, his head was up, his vocabulary was improving, and he was able to communicate things clearly and assertively.

His progress was exciting to watch. And by 16, I’m noticing he’s a very natural teacher. He’s teaching from his heart and from his training, not repeating things from a book or YouTube video.

At the time, my lead junior instructor was good, but his teaching seemed forced, almost rote. Typically, I want my instructors to follow my lead, but ultimately to develop their own style. This instructor wasn’t doing that.

James, however, was. Every time he spoke from the heart it was exciting, sincere, and best of all, correct. So, I decided to start giving James more instructor time than my lead. And, of course, he took the ball and ran with it, eventually becoming a far better instructor. 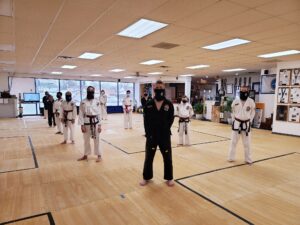 As a student, James was always endearing to the older instructors. As an instructor himself, nothing changed. He very quickly became “one of us,” cracking jokes and busting chops with the other instructors.

I remember one time when James thought his phone got stolen. We looked around for hours, all over the neighborhood, trying to find it. Turns out, he forgot that he left it in his father’s car. It’ll be a good 6-7 years before he ever lives that one down.

But as with everything, he takes all of the ribbing in stride, and he keeps getting stronger and more resilient because of it.

James is now 17 and is my lead junior instructor. I love watching him teach. One of my black belts recently took a virtual class with James and his response summed it up perfectly:

“It was so good to see James on the other side of the camera. His enthusiasm and exuberance is intoxicating. His teaching is energizing and informative. What more could you ask for?”

This is the little seven year old boy who wasn’t going to become anything.

This is the little seven year old boy from whom teachers didn’t expect much.

This is the little seven year old boy who beat all the odds and is a national champion-level competitor, whom I have no doubt will one day be a world champion. 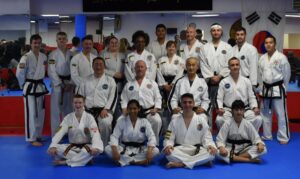