Let’s face it. Most people get anxious about starting Tae Kwon-Do because they’re afraid of getting beat up. Or possibly worse…embarrassed.

Most depictions of martial arts in movies and TV are violent, so people naturally equate martial arts with violence. I think they see people fighting, getting knocked out, getting killed, moving with amazing athletic ability, etc. It can produce tremendous anxiety about starting a Tae Kwon-Do program.

And don’t get me wrong, we are absolutely teaching people a martial art that incorporates techniques that produce violence. But doing so doesn’t necessarily mean that you are a violent person. Convincing an otherwise good person that we can teach them to be fierce and tough while remaining good is one of the most difficult parts of being an instructor.

Others get anxious simply because they think Tae Kwon-Do is hard.

I had a guy come in who was a total desk jockey. He said that martial arts was something he’d wanted to do for a long time, but never took the first step.  This is a common sentiment, and it was certainly the case for me when I started.

He came to me and asked: “do you think I could do this?”

“You’re just saying that,” he responded.

I told him that when I started martial arts, I didn’t think I could do it either. Back then, I was this long-haired musician who could maybe do a push-up and a half. But, through repetition and practice, I was able to achieve a black belt, and beyond.

I offered him a free private lesson, he took me up on it, was able to make it through the whole thing, and said what most people say to me after their first lesson: “that was a lot easier than I thought it was going to be.” I told him that we start out easy, but it gets tougher.

More accurately, you are going to get tougher.

After a person takes the first step and begins a martial arts program, a new anxiety sets in: the anxiety to perform.

As much as we’re coaching students and trying to move them forward, there sometimes comes a time when they have to take a test and they realize they’re not ready. Unfortunately, these days we’re taught that when we feel like we’re not ready, or when something gets too hard, that we should just quit. Don’t embarrass yourself, don’t put yourself in a position where you don’t look amazing, just quit.

This is the time when people actually need to buck up and get tough. But, often the desire to quit takes over.

I always tell people that, if I’m doing my job right, there will be at least four times before they achieve black belt that they should want to quit Tae Kwon-Do. That’s because I’m putting obstacles in front of them, and those obstacles will get tougher as they go. It has gotten to the point that I can almost tell them the exact dates that they will want to quit.

I also have to tell them, though, that when those times come, that they need to trust me enough to talk to me about it and not run away, because it’s all a part of the plan.

And yet, people still quit.

It reminds me of a meme I once saw. It’s a picture of a guy digging for diamonds. He has dug this long tunnel and once he’s gotten about five inches away from hitting paydirt, he quits. The text says “Never give up. You might be closer than you think.” 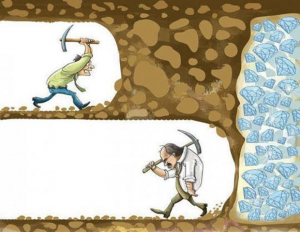 This happens a lot in martial arts. There is an anxiety associated with failure that forces people to give up, or to not even try hard in the first place.

To overcome this anxiety, it is important to remember that failure is part of the process. When we teach children that failure is bad, we are producing adults who are afraid to fail.

And, in turn, we are producing adults that are incapable of great success.